Top Posts
The Importance Of Sports Nutrition For Professional Athletes
Best Running Shoes for Eco-Conscious Runners
What does a Runner Need More of?
Finding My Way Back as a Blogger
Thoughts from My 10 day Run Streak
The Curious Case of Aanchal Sehgal
What is the Wim Hof Method?
Why Do we Bend? In Life and in...
#2 Running & Weight Loss – How to...
5 Reasons Why Women Should Run! (and Thanks...
Home Fitness Alice the Runner and Her New Year Resolution
FitnessMotivationRunningThe Writer in You

written by The Anonymous Runner January 10, 2020 Alice opened one eye…5 AM 01Jan 2020 ! She jumped out of bed with unbounded excitement and exclaimed, “I’m going for a run”.

Her husband opened one tired eye and said with unfeigned derision, “ Your crazy resolutions ! First day of the year and you want to go for a run ! Come back to the quilt. You are mad, entirely bonkers, completely off your head!”

Alice looked at her husband, who had already gone back to slumberland, and said softly to herself, “But darling, the best people are !”

Alice was a true-blue 5 AM runner. She had begun her marathon story a few months back. The beautiful memories of her journey from a couch potato to a marathoner were permanently etched in her mind. Back then the old Alice would have snuggled deeper in her quilt and said, “Running at…… 5AM ! This is impossible!” But the new Alice was of the opinion, “Impossible ? Only if you think so”….. 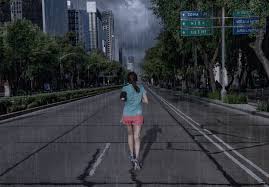 She wondered as she laced up her shoes….. What had changed ?

Her new found habit gave her a sense of purpose, a reason to get out of bed … to begin each day with positive intention and action….it set her up for the day…. beating the alarm clock and going out for a run come what may…. a mental victory! It told her that…. she had the controls to make the day meaningful. It was also her cherished and fiercely protected ‘My Time’. The feeling of running in the dark while the world still slept…. was her favourite part of the day ! It cleared her mind, energised her body and connected her with people striving for positive vibes.

Alice came out of her reverie when she reached the motley group of her fellow runners ! ‘Happy New Years’ followed ! She felt secure and happy! She was with her tribe of fellow crazy runners. A wizened old lady runner looked at her and remarked, “You have that look…. this is going to be MY best year yet”

Stunned  and taken aback by her insight, Alice couldn’t help but asking, “How did you know, am I that transparent ? Looking at her fondly, the old girl replied , “ No Baba, the secret is to surround yourself with people who make your heart smile. It’s then……..

……..Only then that you will find Wonderland !”

Alice thought about it and realised that it was true. Her runners group did not judge, they cheered her victories, they supported her through her injuries, her failures were only lessons learnt ! The were like her second family !

The run started slowly. It was cold and dark, their breath came out as puffs of smoke. Slowly the sun slowly peeped over the horizon and the warmth started flowing through her being.

Alice soon got in the runners flow! A blissful feeling where she felt effortless, in the zone  and in complete connect with herself…… emotionally, mentally and physically! Last nights alcohol, late night dancing, lack of sleep, the fight with the husband…were soon a fading memory. Because….she chose to see it as brand new day ! New adventures, new beginnings, new challenges….

She reached back home to find the family still asleep ! Nothing had changed, nothing was different. It was still the same. What had changed was her thoughts ! She smiled to herself. She was ready for whatever the world had to throw at her…. because she was already victorious and nothing, repeat nothing, could keep her spirit down.

SHE REALISED THAT SHE DID NOT NEED RESOLUTIONS !!!!

Her 5 AM running gave her the reaffirmation everyday…. She had the controls of her life…… she was Invictus and could achieve anything! EVERY DAY IS A BRAND NEW DAY !!!

She partied in the day! Happy New Year!

Dear Tanya, Alice is a good pseudo name for Runners and bloggers like you.
Nice one.
Happy New Year Tanya.

Very Happy New Year to you too ! Thanks for always dropping by http://www.wellthyfit.com

Beautiful article. Very well written. You just made me run the whole story in my mind. That’s how you actually fell after a run. Thanks for teaching me a new word INSISTENTLY.